Jeff Jarrett is my new favorite wrestler of all time. Here is why.


Seriously, this shit is fucking awesome. My hat is off to Jeff, and I hope that they go all the way with this MMA stuff, complete with MMA entrances/vaseline on the face/in-ring introduction/no pyro. I am not being sarcastic in the least bit when I tellsya that I freaking love this stuff, and cannot believe I am giving Jeff Jarrett of all people such kudos.

TNA will probably find a way to screw this absolute GOLD up, but hell, we'll always have the Double J Dojo...
Posted by Nuclear Clown at 8:20 PM 1 comment:

My actions are controlled easily by clever marketing.

So, I shave my head, and find a whole brave, bald new world of shit to buy for myself. You see, I am spending more money on my bald head than I ever had when I had hair! I mean, look at all this cool shit that is made just for bald people, they have a company called Headblade, which specializes on all sorts of funky, brightly colored, smartly marketed junk to buy to keep your skull smooth, soft, and glossy. Don’t believe me? Take a look at the HEADBLADE, which looks like it should come out of Batman’s utility belt and not the shaving section of the Rite Aid down the street for me. 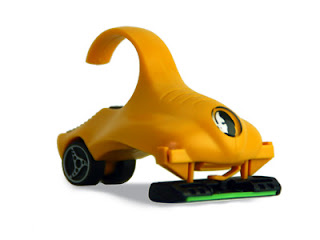 That shit’s got WHEELS, son! A razor with wheels? How cool looking is that? And that’s not all! You see, Headblade sells all sorts of funky creams and lotions and head-related crap to buy for yourself and your newly exposed noggin. At present, I have a Headblade, the OFFICIAL headblade menthol shaving cream gel, and two bottles of the Headlube stuff (One Sunscreen and the other Glossy). Just take a gander at these spiffy looking products! 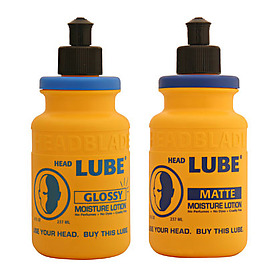 This descent into baldness made me realize something about myself that I guess I always knew-I am a fucking sucker for any kind of marketing. If you have a snazzy logo and some interestingly colored, sweetly packaged junk to sell me, I will buy it up in a second. Now, the Headblade stuff I have isn’t crap-it actually works very well, but it’s just funny how anything with snazzy marketing and a cool logo can get my attention. This is probably why I have so many goddamn Dungeons and Dragons books that I continue to buy even though I currently hate Wizards of the Coast and everything that burps out of its gaping, cash hungry vagina.
But anyway, the moral of the story is, if you have a flashy logo and brightly colored merchandise, just come and take away all my money, because I’m already sold.
Posted by Nuclear Clown at 8:09 PM 1 comment: 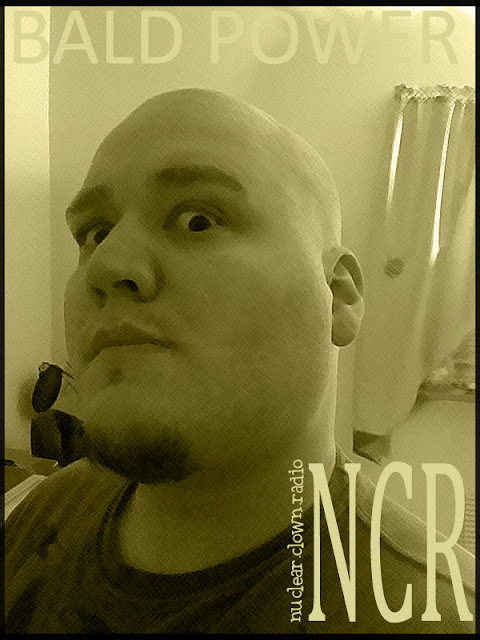 IN THIS COMPLETELY AND TOTALLY SHAVEN EPISODE:
-Jesus took all of my hair away, because apparently I was not ugly enough as is!
-﻿A far too in-depth review of the Adventures of Pluto Nash!
-My place in the history of Christian Gangsta Rap!
-I'm the only person in the world that doesn't like the Beatles!
-Mick Foley's life is not so interesting that it takes 4 autobiographies to sum up!
-Harry Potter is a pompous bastard!
-On the Irradiated ipod this week: Baby Huey tells it like it is! From his album The Baby Huey Story: The Living Legend, we all get to go through about 3 minutes of "Hard Times!"
RIGHT CLICK TO DOWNLOAD
Posted by Nuclear Clown at 7:12 PM 4 comments:

I suck at this Blogging thing.

I realize that I hardly ever actually post Blog-type things here, and that is for a reason. To me, if something is really on my mind, I find it better (and more fun) to just talk about it on the podcast instead of writing it all out. Partially because I’m lazy and my spelling freaking sucks, but I want to really give it a go, so I will do my darndest to come up with some more written material for those of you who have actually found my little site here. So, this means good news for those of you who absolutely hate the sound of my voice!

More prose should be coming your way…I think. Hopefully.
Maybe I’ll start doing more in depth reviews on wrestling shows like TNA or whatever. That would be pretty cool and fun to write. Any suggestions would be appreciated!
Posted by Nuclear Clown at 6:37 PM No comments: 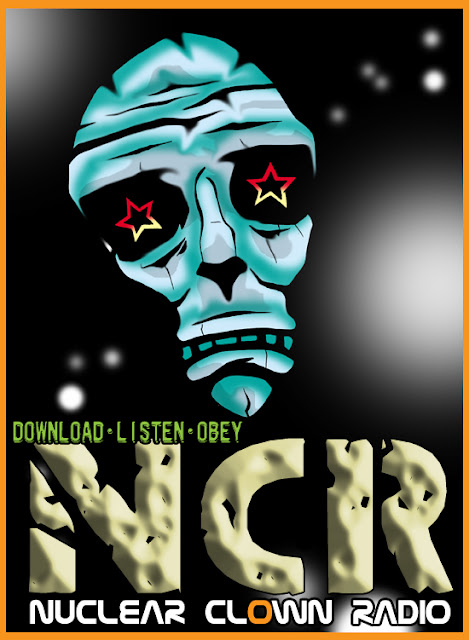 IN THIS THIRD TIME IS CERTAINLY NO CHARM EPISODE:
-More Dot Com Disasters!
-Eddie Murphy is having real problems making movies nowadays!
-Gay accusations from my mysterious past!
-Wrestlers don't always make good decisions when choosing tattoos!
-Jackass + Wild Animals + Neflix = My complete and undivided attention!
-Macho Man Randy Savage is STILL the Heavyweight champ of Hip Hop!
-On the Irradiated ipod this week: David Bowie weaves a wondrous and sad tale with one of my favorite songs ever (minus the ending part) "The Bewlay Brothers" from his album Hunky Dory!
RIGHT CLICK TO DOWNLOAD
Posted by Nuclear Clown at 12:28 AM 2 comments:

Eddie Izzard wants us to all Believe!

Posted by Nuclear Clown at 11:56 PM No comments:

So on the podcast I was discussing silly Tattoos, and true to my word, here is a nice picture of AJ Styles' big ass, goofily placed tattoo. As you can see, AJ is so very proud of his silly fleshmare that he is screaming in victory. 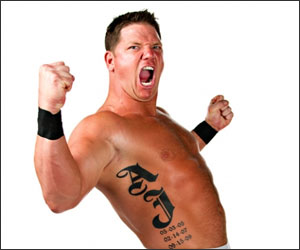 But good ol' AJ isn't alone in silly torso-advertising, and Brock Lesnar is right up there as far as having a funny looking tattoo. However, I think people are downright doofy for thinking that Brock's "Kinda sorta Sword" looks ANYTHING like a penis. Unless, of course, your junk happens to have 4 balls lined up in a row and for some reason you have spikes jutting out of the base of your child pipe. I don't know the tactical benefit of having a brass knuckles/sword combination, but then again, my days of swordfighting for my life are far behind me. 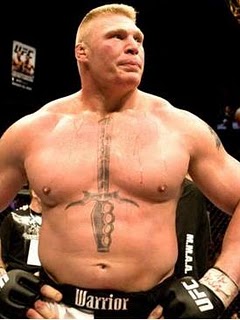 Posted by Nuclear Clown at 9:45 PM No comments: 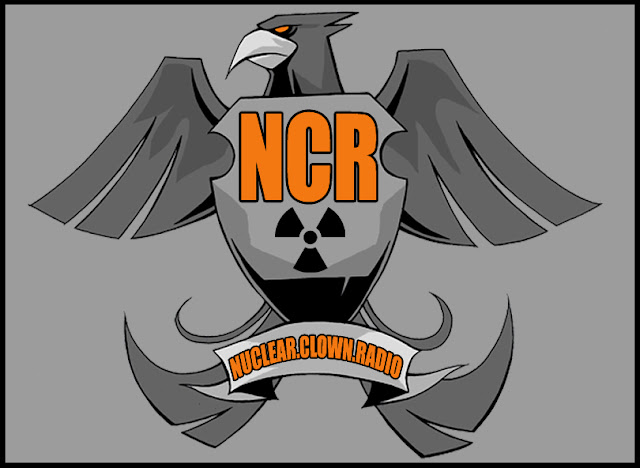 IN THIS TWICE - RECORDED SECOND INSTALLMENT:
-More technology nitemares!
-More cat meowing!
-Kat Dennings blesses the world with breastage!
-Attack of the 20 year sequels!
-TNA Wrestling signs Tyranosaur - Immediately becomes World Champion!
-Darryl Hannah sort of looks like a man!
-A cussing retrospective!
-On the Irradiated ipod this Week: We take a trip back to the good ol' mid 90's and take a listen to "Supervixen" by Garbage, whose singer showed me her hooters kinda sorta this one time!

This video made a man outta me.

I've always thought that Shirley Manson was one hot slice of fine, and she was in her absolute prime in the mid-90's, bringing that fantastic blend of pug ugly with mind blowing sexy, to create a strange sort of super hybrid sex kitten that made my gonads explode each time I saw her.

In fact, I loved her so much that I sat through the goddamn VH1 fashion awards to watch her sing some, and she rewarded me by practically flashing me at around the 3 minute mark of her performance. I cannot tell you how many VCRs I broke rewinding this shit again and again, to stare longingly at this magnificent woman's almost-full boob profile.

So now I share this with you, my friends. You youngsters will undoubtedly find it funny that this little sudden boob flash was so exciting to me back then, but then again, you come from an age where the hot babes of your time routinely record themselves sucking off their boyfriends in crystal clear HD and flashing their snatches on every other car exit.

Posted by Nuclear Clown at 4:13 AM No comments:

The other day I was tinkering around with some art to put up when I posted my first edition of NUCLEAR CLOWN RADIO, and the first thing I drew was this picture of Atomic Angie with some headphones around her neck. So after I finished this, I didn’t really think it fit the type of mood I wanted to convey with my Podcast, so I put it aside and then drew the freaky screaming yellow guy that I later ended up using as my Podcast picture.
I really like the Angie picture a lot, though, and it’s probably my favorite drawing I’ve done of her, and I figured it would be a shame to just have it laying around, so I’m posting it here so it’s not wasted. I think it’s pretty funny because I always draw Angie in pictures that showcase her enormous, downright jolly jugs, and here, this picture of just her face, is my favorite one of her that I’ve ever done. She just has this sort of sadness about her features that I think came out really good.
I never really talk much about Angie, who is the official mascot for all things Nuclear Clown, so I will dedicate this post to her!
The first thing I should point out is that I look like a Mutant, so I knew that if I was going to make a jump into doing Youtube Videos, I should really give some kind of eye candy to the viewers, and I doubt that my big fat head counts as “eye candy” of any sort to anyone.
See, girls on Youtube have it easy-a hot girl can just make a video about anything, show some cleavage, and boom, subs go through the roof. It’s a harsh reality for us ugly folk that people just don’t like looking at us, so I had to try and balance out my horrendous appearance with something far more lovely. So I made a nice, busty gal to go along with the whole clown theme, and there you have it, I squirted the lovely Angie out of my figurative creative birth canal and now she is all grown up and packing a set of Double D’s that make you wanna stand up and scream for buttermilk!
So, from time to time I’ll just post on this site some of the Atomic Angie images that I never finish/use whatever, because damn, the girl looks spiff, and everyone likes to look at pretty stuff.
Posted by Nuclear Clown at 12:08 AM No comments: 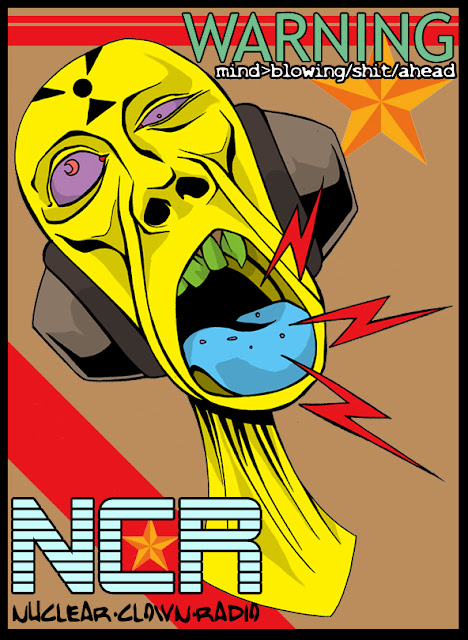 IN THIS STARTLING FIRST EPISODE:
-The triumphant return of the McRib!
-CRACK TALK
-The death of halloween!
-Kindred: The Embraced actually on my TV in 2010!
-A Dungeons and Dragons Essentials...uh...discussion!
-My cat providing backing vocals!
-X Box's new look-Me no likey!
-On the Irradiated ipod this Week: Remote Tree Children's "Blood Pressurize" from the album Veteran of the Loudness Wars. Go to GlenPhillips.com to listen to Glen's entire solo collection of work and side projects for free!

Posted by Nuclear Clown at 2:08 AM No comments:

Riley Martin thinks I'm a genius. No, I have proof!

Riley Martin's Cosmic Legend is ready to blow your mind to pieces!

Posted by Nuclear Clown at 1:40 PM No comments: