Posted by Nuclear Clown at 12:00 AM No comments: 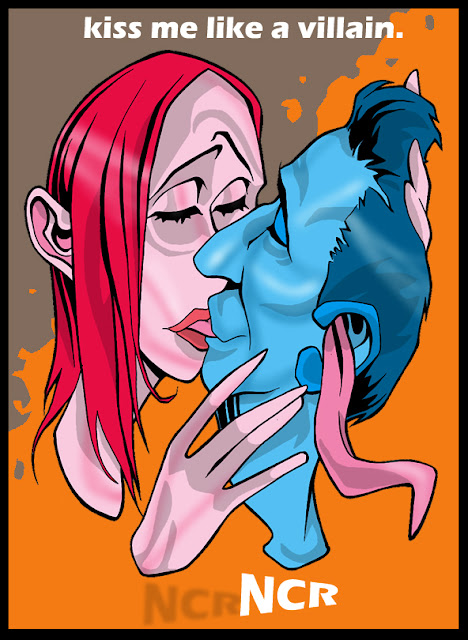 IN THIS LITTLE GIGGLY DEMON SMILE:
-Red hot wisdom!
-Hail to Gotham City's Master of Disguise!
-French Silk Pie = Angel Snatch?
-An Irradiated Movie Review: Network!
-Nakedhoneyeatingbearsomg!
-Puking into toxic waste barrels for dummies!
-Star Wars: The Old Republic gets moody!
-On the Irradiated ipod this week: System of a Down locks us up and throws away the key with the opener from Toxicity, here comes a "Prison Song!"

AN IRRADIATED RETRACTION: On the Podcast this week, I say that they created False Face just for the Batman TV show, which I recall reading about the Batman TV show online someplace. However, further investigation reveals that he was in fact a minor Batman Villain featured in the comics prior to the TV show! Oops! I guess you can just call me WRONG FACE, teehee!

BONUS: Here are the only two episodes of the glorious Batman TV show that featured my favorite Gotham City weirdo, False Face, portrayed by the man with the manliness name in the history of forever, MALACHI THRONE! It's a true shame that he was not featured in more episodes, but we'll always have these!

Posted by Nuclear Clown at 5:31 PM No comments: 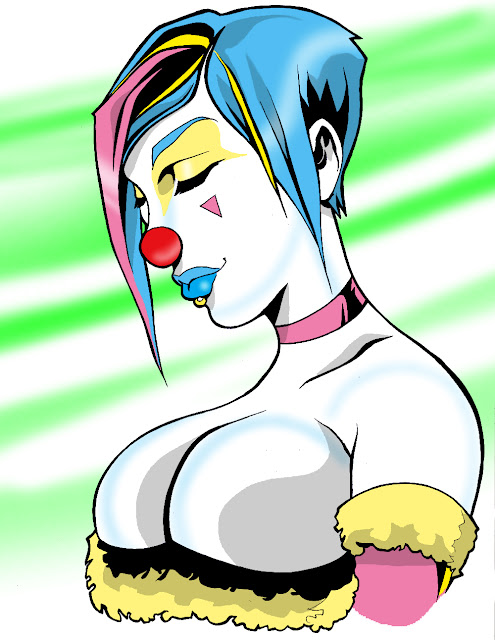 I had this picture of Angie penciled for literally about a year, and I just got around to inking/coloring it. I was gonna use this for the poster to NCR episode 84, but it looks too much like the poster for Episode 31, so I scrapped it. However, I just couldn't let her go to waste, so here she is!
Posted by Nuclear Clown at 7:09 PM No comments:

Posted by Nuclear Clown at 6:30 AM No comments: 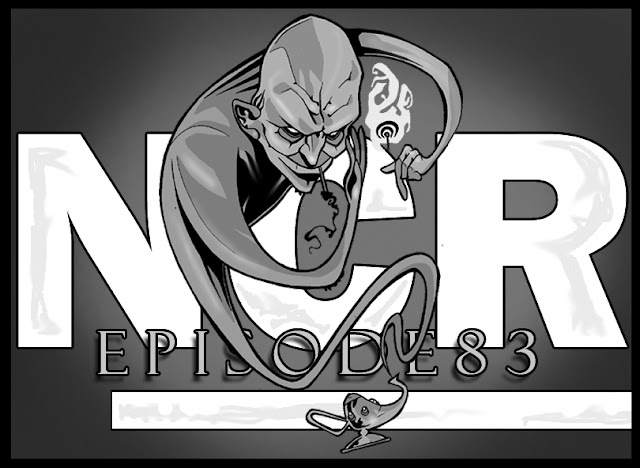 IN THIS HOWL FROM BEYOND:
-Time to go back to school with some Irradiated cliff notes!
-The Sunny side of domestic violence!
-NFL MAN TALK?
-Robocop...Mark II!
-The fifth coming of the iphone nears!
-A Nuclear Clown Pro Wrestling Hall of Fame Tragedy!
-How to end the world (Part 3)!
-On the Irradiated ipod this week: We are graced with a magnificent song from my second favorite Otis of all time, Otis Redding, and his tremendous and timeless classic "I've got Dreams to Remember!"

Own a piece of Nuclear Clown Incorporated!

(Contest Update: As of 9.24.12, two irradiated super genius winners have been crowned! That means three more prize packs are available, so get your tests in quickly! Remember, once five prize packs in total are claimed, the contest is over. Act now!)

I like contests! Do you like contests? Yay! Let’s have a contest! But first, you should watch this video right here…

Okay, here are the rules!
1. Copy and Paste the 25 Question test presented below onto an email.

2. Highlight your answers to the test questions in BOLD and email them to me at IrradiatedOne@aol.com. Please don’t send me an email with “ABBDCCACDCDDDC” because I will lose my mind. Don’t forget that Question 25 is an essay question! I've even provided a nifty example below!

Which of these holy delicacies does McDonald's no longer sell that makes Dave really sad?
A) Filet-O-Fish
B) Big Mac
C) Arch Deluxe
D) Quarter Pounder

3. Please include a mailing address, along with your choice of prizes (One prize from each category, further detailed below) with your test answers in case you win!

4. Keep in mind that SUPPLIES ARE LIMITED. Only the first 5 Passing tests will win prizes! This is determined on a first-come-first-serve basis, so make haste in your studies! Also, if your choice of prizes has already been claimed by someone who passed the test before you, you will need to choose a secondary prize from those left…durnit!

5. The contest will last until 5 Prize packs are claimed. After 5 Prize Packs are claimed, the contest is over and I will reveal the answers to the test on an upcoming episode of Nuclear Clown Radio.

How to make the Grade!
If you get 20 questions or more correct on my little test here, then you pass! Hurray for knowledge! The first 5 people to pass the test will win prizes! If you are a super duper Nuclear Clown Incorporated scholar mega genius and manage to get all 25 questions right, you will get a super special BONUS prize as well!

Screw the rules, WHAT DO I WIN?
Those who pass the test will be mailed 3 original pieces of art I’ve done that have been displayed on my Youtube Channel or on my Website. There are 3 categories of pictures, and winners can choose 1 picture per category. The three categories are listed below, along with SUPER CRAPPY photographs of the merchandise!

Category 1: Ugly Dave Pictures
These are drawings of me, and they are ugly. These have all been featured on the posters for episodes of Nuclear Clown Radio. 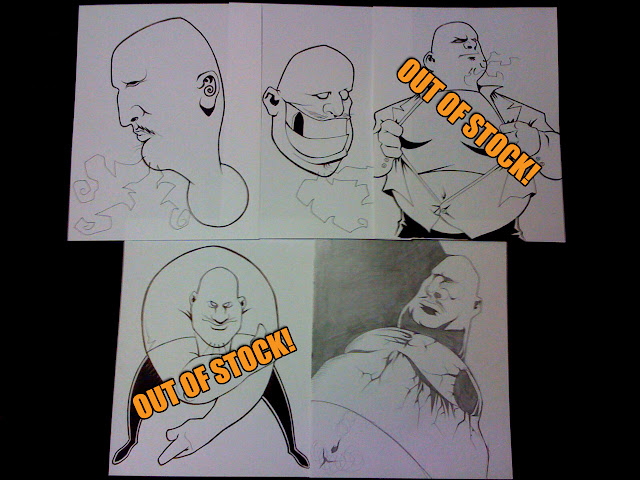 Category 2: Various Weirdos
These are drawings of various weirdos doing various things that have been featured on the posters for episodes of Nuclear Clown Radio. 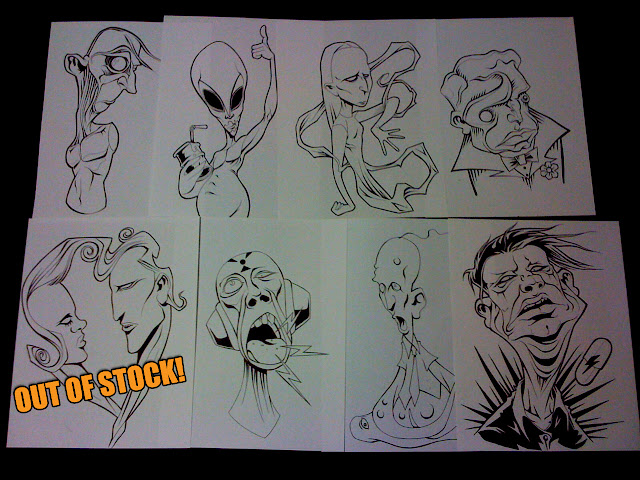 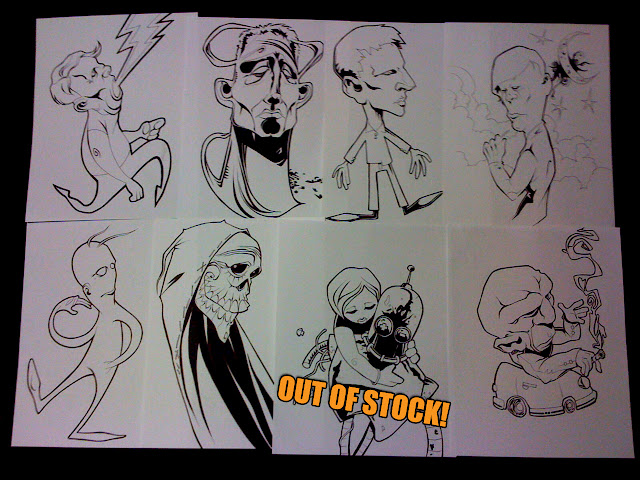 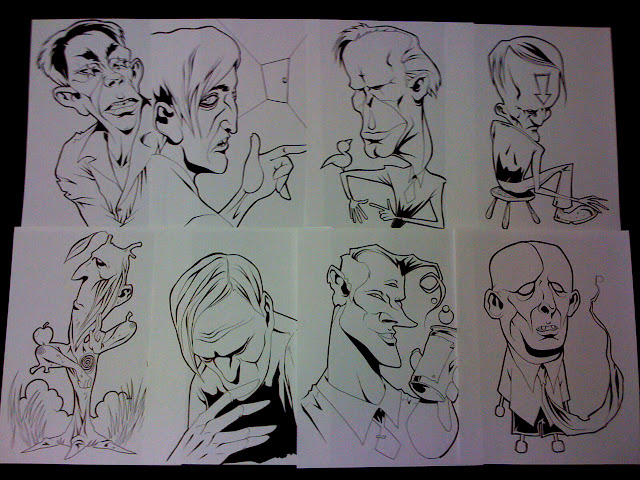 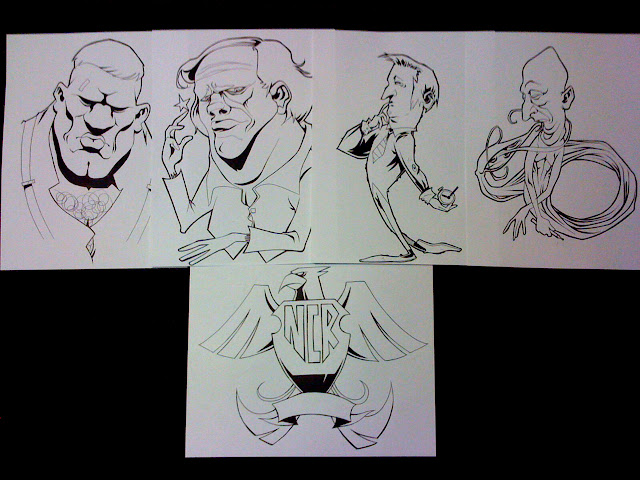 Category 3: Angie! Angie! Angie!
I love boobs. You love boobs. We all love Atomic Angie. These are drawings of everyone’s favorite BOMBshell. Get it? Bombs? Nuclear stuff? Boobers? These pictures have been featured on the posters for episodes of Nuclear Clown Radio, or have been used/showcased on my Youtube Channel or on my Website in some fashion. 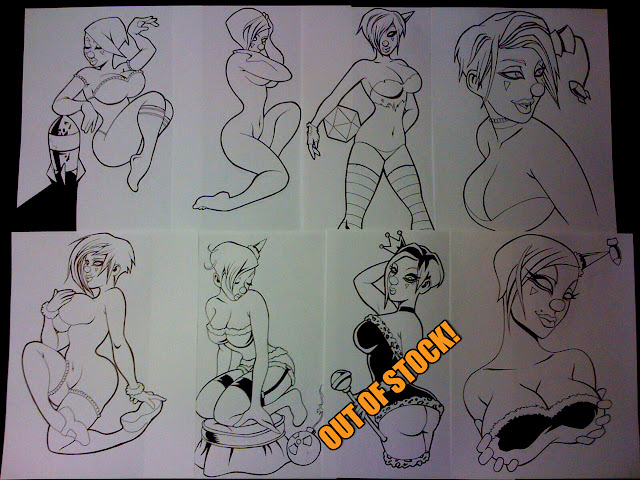 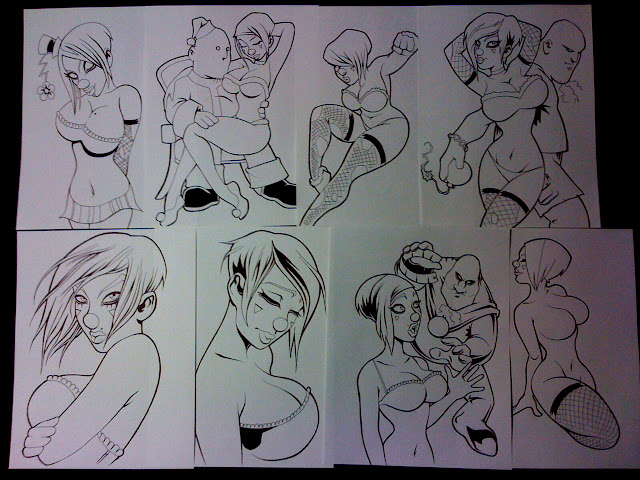 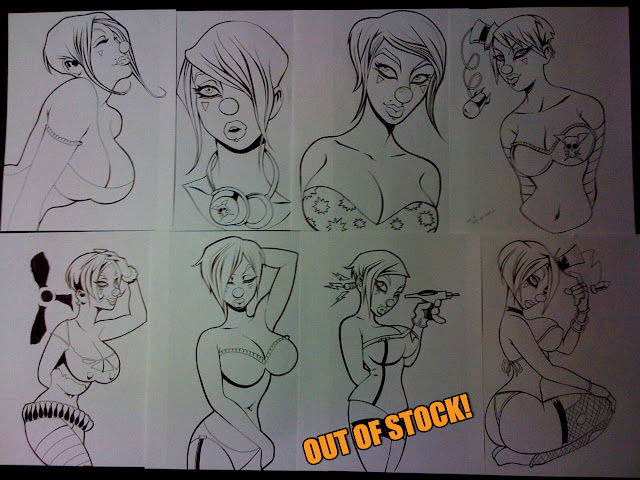 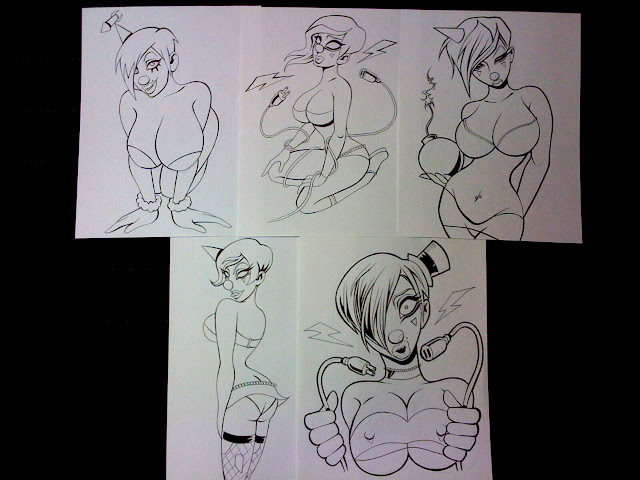 A NOTE ON PRIZES: The Prizes pictured above are the Original pieces that I have immediately on hand. If you have won a Prize and REALLY want a particular piece of art that was used on NCR or NCTV that is NOT shown in the Prize Photos, then email me the piece you are looking for and I will TRY and track it down for you. I can’t make promises, though, as I am a generally disorganized fellow, but I will do my darndest for you.

All winners will be announced on Nuclear Clown Radio.

THE OFFICIAL NUCLEAR CLOWN INCORPORATED BACK TO SCHOOL QUIZ!
1. What species is Atomic Angie?
A) Human
B) Clown
C) Mutant
D) Armadillo?

2. When Dave was a kid and had to dress up as an animal for a class presentation, which animal did he choose?
A) Zebra
B) Vulture
C) Jellyfish
D) Armadillo?

4. What is best in life?
A) To crush your enemies
B) See them driven before you
C) Ride off to the lamentations of the women
D) All of the above

5. Dave once co-painted a picture on his art room wall in high school. What was that awesome picture of?
A) General George S. Patton
B) The Terminator
C) The Predator
D) The Stay Puft Marshmallow Man

6. Pick the one thing from this list that Dave doesn’t like.
A) Spiders
B) Big, natural and fluffy boobs
C) Netflix
D) Moira Quirk from GUTS

7. Dave plays or has played all of the following MMOs except one. Which is it?
A) Star Wars: The Old Republic
B) World of Warcraft
C) Star Trek Online
D) EVE Online

8. What is Dave’s favorite Dinosaur?
A) Triceratops
B) T-Rex
C) Raptor
D) Brontosaurus

9. If it takes more than 60 Zombies to pose a threat to 1 Vampire, that means that zombies are…
A) Stupid
B) Weak and lame crybabies
C) Overused, boring and played out
D) All of the above

10. What does Dave use to color his artwork?
A) Colored Pencil
B) Adobe Photoshop
C) Watercolor
D) Armadillo?

14. What branch of the military did Dave “join” in the April Fools Epilogue Episode of Nuclear Clown Radio?
A) The Coast Guard
B) The Navy
C) The Marines
D) The Army

15. When God visited Dave in the Nuclear Clown Radio Episode 31 End of the World special, what did he want in return for sparing New Jersey from the Rapture?
A) An ipad 2
B) 500 US dollars
C) A brand new car
D) Armadillo?

17. Dave once interviewed his idol Riley Martin.
A) True
B) False

18. Dave still uses AOL even though it sucks and everyone is mean and laughs at him for it :[
A) True
B) Armadillo?

19. Dave loves all kinds of sports and regularly does manly things!
A) True
B) So false it isn’t even funny

20. Dave likes the heat and prefers spring and summer to the colder months.
A) True
B) False

21. What is Dave’s Blood Type?
A) B
B) A
C) Q?
D) This is a trick question because Dave doesn’t even know his own Blood Type

23. Dave has a flag in the background of most of his videos. Which flag is it?
A) Scotland
B) Norway
C) Wales
D) None of the above

24. Dave has owned all of the following video game systems except one. Which is it?
A) Sega CD
B) Nintendo 64
C) Super Nintendo
D) Sega Genesis 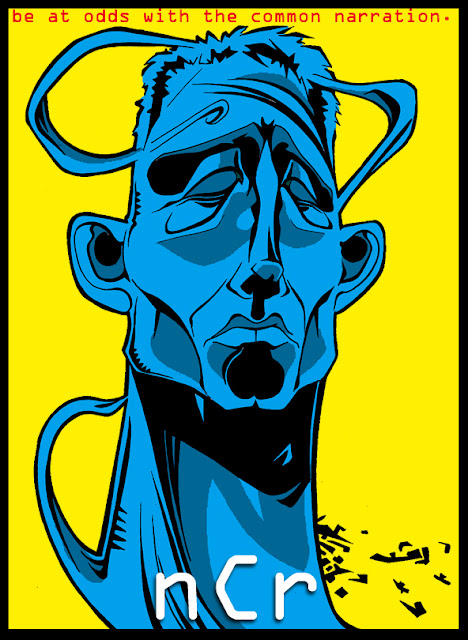 IN THIS TECTONIC SHIFT:
-Get well soon, King!
-Even more Irradiated Slang!
-Flash Gordon meets Dungeons & Dragons meets boobies and America!
-The death of your Legacy!
-Sudden Impact, where art thou?
-Dirty tricks from the Resident Evil franchise!
-Corey Feldman: VILLAIN!
-On the Irradiated ipod this week: In honor of the upcoming sequel to the rather spiffy game Borderlands, we play the fun theme song from the first game, brought to us from the self-titled debut album from Cage the Elephant, here comes "Ain't No Rest for the Wicked!" 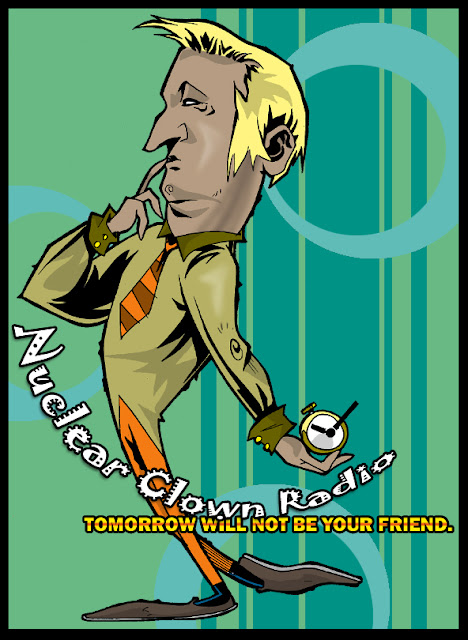 IN THIS RESILIENT CHEMICAL STRAIN:
-An Irradiated duel to the death!
-The most greatest Theodore I know!
-A very special message to Ric Flair and the ladies of America!
-The finer points of Rocky and the real life deal!
-Painting yourself into an enormous corner, Old Republic style!
-DINO FIGHT!
-The secret and sinister evils of Dora and Diego?
-On the Irradiated ipod this week: We all get together and ascend above dissension with David Bowie and AL B. FREAKING SURE! singing about the finer points of groovy unity with the title track off of the rather special album Black Tie, White Noise!